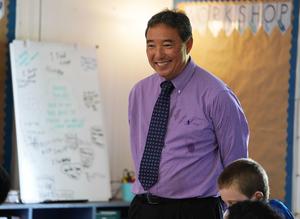 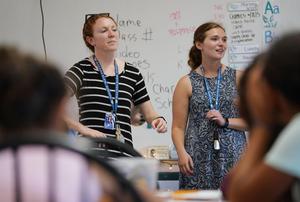 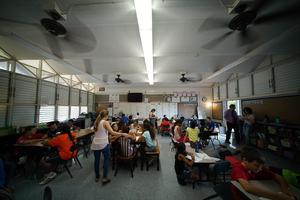 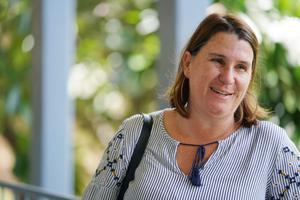 Thank you to Mr. Shigeta and Mrs. Jackson for all your efforts!

The Hawaii Department of Education (HIDOE) began the 2017-18 school year with 538 teacher vacancies, though these spots are often filled temporarily by long-term substitutes or emergency hires until a permanent replacement can be found.  To fill the need for new teachers, the HIDOE recruits frequently from the mainland, going to such cities as New York, Los Angeles, Denver and Chicago in the spring to find new hires. This has always been a recruitment strategy, although the department is also ramping up efforts to train homegrown teachers.  Typically, HIDOE recruiters head to mainland sites, screen candidates, then enter them into a large HIDOE database where they’re then presumably matched with a school someplace in Hawaii.  Oftentimes, those recruits don’t know where they’re assigned until they come here.

However, a few school administrators have begun a new approach--create partnerships with colleges by visiting and doing direct recruitment.  Nelson Shigeta, Principal of Makaha Elementary school, has become a familiar face around Marist College, a small private liberal arts college in upstate New York.  The veteran Hawaii principal has visited the campus several times in the last five years where his efforts have been paying off: He’s successfully recruited seven licensed teachers--all elementary education majors--from Marist College over the last few years, including four this year alone in time for the start of the new school year.

“Sometimes we go outside (Hawaii), because we have no choice,” he said of the hunt for teachers.

The Marist transplants to Waianae tell their teacher friends back home about what it’s like to live and teach in Hawaii, and sometimes they decide to come teach here, too, contributing to the Marist-Makaha pipeline.

It may be a small piece of plugging Hawaii’s perennial teacher shortfall--part of a national trend--but it’s one step forward in finding willing individuals to teach in the state.

Recently the HIDOE has begun the incorporating bringing current principals along so they can tell a potential candidate what it’s like to actually work at the school and fill them in on the cultural and lifestyle differences in Hawaii.  “We switched to a talent management approach.  What does that mean?  Everybody in the department is really a recruiter and a retainer,” said Cynthia Covell, HIDOE’s Assistant Superintendent in the Office of Talent Management.  “The teacher’s not shocked when they get here, because they already know.”

While Shigeta has been traveling to the mainland for several years now, his colleague on Maui--Keoni Wilhelm, Principal of Kahului Elementary, is the latest reflection of this strategy shift.  Wilhelm headed to Miami University in Ohio, 35 miles north of Cincinnati, for the fist time this past Spring.  "I tasked myself with going to the mainland to bring back some awesome, young, fresh, open-mindset teachers," he told Civil Beat.  "I wanted them to be certifies, meaning they actually have a degree in elementary education."

Not only did Wilhelm recruit five new teachers for Kahului Elementary, he found an additional four for nearby Maui schools through those connections.  "We started last year with 10 vacancies and this year we have none," he said.  Wilhelm plans to go back to Miami University so he can continue cultivating a relationship with the college.

Principal Shigeta also notes the importance of not just recruiting but keeping teachers in Hawaii.  "(If we) don't provide these follow-up pieces, we're just spinning the wheel," he says.  "We can spend all this money to get people here, but if we don't support them, they can say, 'I just don't want to do this.'"

According to the HIDOE, about 50 percent of mainland teachers reach the five-year mark in Hawaii.  Many have no choice but to leave due to the high cost of living or family concerns back home.

Shigeta's goal is to create a support network for his new teachers so they're not so lost once they arrive.  This goal is also supported from the complex area level staff.  Holly Jackson, one of the Induction & Mentoring Resource Teachers for the Nanakuli-Waianae Complex Area services as that bridge.  Mrs. Jackson helps the new hires find housing, locate weekend activities, even assuage worried mom back home by phone.  "I want them to stay, I want these teachers to be here," said Mrs. Jackson.

The HIDOE's off-island recruitment visits this past year yielded 350 candidates.  About one-third, or 126 individuals, accepted teaching positions for the 2018-19 school year.  This acceptance rate is in line with previous years, according to Nanea Kalani, a HIDOE Spokesperson.

Principal Wilhelm said he didn't ask his new hires from the mainland how long they intended to stay and teach in Hawaii--but he said he recognized through his in-person conversations they were enthusiastic and wanted to work with disadvantaged students.